Every year an organic farmers’ market opens up across the street from my house. How lucky is that? And in just three days, The Withrow Farmers’ Market is poised to start up again Saturday at 9 a.m.

Not only will there be fresh, locally grown produce (like rhubarb, garlic scapes and baby lettuce for sale) free compost will be there for the taking at opening day, only. I plan to load up on pails of the stuff and scatter this fine brew of garden nutrients created by our city’s composting program across my hungry front yard.

And there will be seedlings for traders!

Here’s how it works: You bring a seedling from your vegetable garden and swap it for another seedling in exchange. (I know it sounds nerdy, but we gardening geeks have to get our thrills somewhere…) I’ve nurtured some eensy-weensy but incredibly early-for-the-season basil and Swiss chard in my urban farm beds and who knows what I might get in exchange? 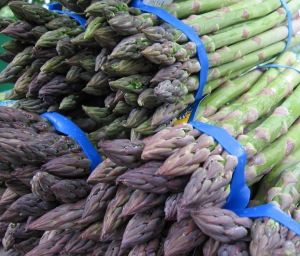 That’s what this market is all about. Whether it’s exchanging money for locally produced food, information, news with your neighbour or your passion, it all happens here.

Three years ago, I bought my first bag of garlic scapes at this market from organic farmer/ vendor Jessie Sosnicki of Waterford. Each scape looked and felt like a piece of curled up, green skipping rope. I had no idea what to do with it until the woman standing beside me rolled her eyes in pleasure and said in a deep, European accent, “This deesh I make is so good. Just cook dem in olive oil until melting and add herbs.” I did and was hooked.

Jessie admitted that for years she’d been tossing garlic scapes into the Sosnicki farm compost until her mother-in-law told her how tasty they were.

There’s a lot to learn when it comes to growing and cooking food. At Withrow Farmers’ Market you can come and have a food epiphany or two, all the while supporting the fine farmers who work like crazy to feed us.

And speaking of working like crazy, Roberta Stimac, the market’s esteemed organizer reports that the 2010 season will feature returning and new vendors including a handful of vegetable farmers, an Angus beef grower and several bakers.  (Expect to see more posts recounting great finds and the people who produce them here.)

The Withrow Farmers’ Market runs every Saturday from 9am to 1 p.m. and is located in the northeast corner of Withrow Park, just a block south of Danforth, off Carlaw Avenue.Volunteers are welcome and much needed. (For more information go to the web site and click on “About Us” to sign up for the weekly newsletter. Psst, check out the site’s recipe section, too.)

QUINCE! #getfresh #islandgrown #cowichanvalley #quince #rosepetalsyrup #quincelove
It’s been an amazing tomato summer/fall thanks to seeds from @creartful_dodger and @vickisveggies #tomatoes #heirloomtomatoes🍅 #cowichangrown #saltspringseeds #seedysaturday #seedsaving #westcoastseeds #seedexchange #seedsofdiversitycanada
Crabapple season. #crabapple #fruitpicking #fruit #getfresh #organicgardening #jelly #nopectinaddedjelly #cowichangrown
When eating lunch on a sunny September day at Alderlea Farm and big bags of organic tomatoes sit in a pile by the cash register, you know, if you are a tomato lover, they will soon adorn the base of your blue roasting pan, be speared with homegrown garlic, drenched in olive oil, basil tucked under every red rump, each and all receiving a scatter of Vancouver Island flaky salt before entering a 425 F oven and roasted into a luxurious, other worldly sauce. You just know that. #tomatosauce #beefsteaktomatoes #CowichanValley #basil #oliveoil #vancouverislandsalt #heaven
Fall crocus. A bittersweet arrival. I picked the stamens last year. No saffron luck. #flowers #crocus #cowichanvalley #cowichangrown
Tree frog population loves hanging in my corn and calla lily. #treefrog #cowichangrown #pinkpopcorn #saltspringseeds #reptilesofinstagram #青蛙 #🐸