After eight, olive oil infused days of travel through northwestern Sicily with my husband, I’m in withdrawal, missing not just the meals and the wine, but the people. Never before have I been surrounded by a population more endearingly obsessed with food than, well, I am.

It was a revelation that started in Palermo, walking through the airport’s departure gates and finding an espresso bar smack dab before us.

Bleary-eyed with jet lag, Don and I both needed a wake-me-up fix. He asked for orange juice and sighed audibly when handed a tall, ruby-coloured glass of blood orange juice, its juices all berried up and pulpy. I knocked back a cappuccino and no, it’s not true: espresso isn’t always perfection in Italy and the odds only weaken in airports.

On top of that, I couldn’t suppress my mangiacake ways. I wanted milk in my espresso and I sensed the cut-off hour had arrived. You see, no Italian worth her Gucci purse deigns to drink milk-contaminated espresso after breakfast and here I was asking for “una cappiccinno”.

With those two simple words, I commenced a Sicilian eating spree in the most mangled Italian two Canadian lips could butcher, confusing masculine for feminine, stressing all the wrong syllables and flagrantly avoiding verb conjugation.

I’d open my mouth and Italian barristas would furrow their deep black eyebrows in contempt. So it was a relief to find the salesmen at the prodotti tipici bus in Trapani just one day later. 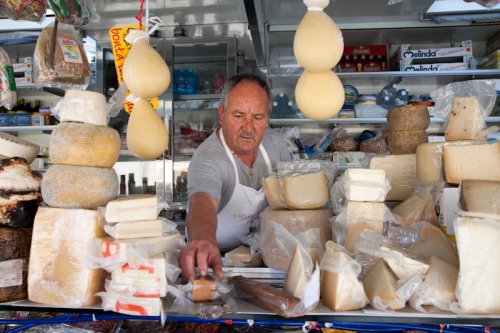 These guys were friendly, smooth and looking for a sale, standing beside a huge, converted old bus they’d transformed into a travelling food show. Lonely and customer-less, they looked hopeful as we parked our rental car nearby. They smelled a turista and her wallet coming by. 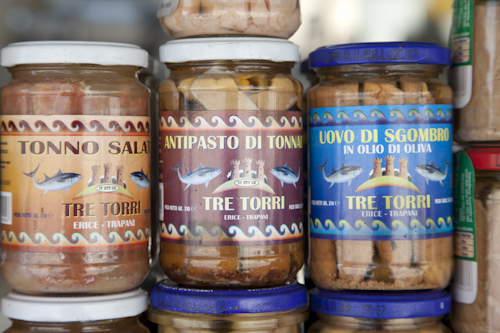 “Signora, prego!” said the first one, a scruffy, round faced vendor who shoved his outstretched palm in my direction. On it were two, massive green olives perched on a napkin. I bit into their rich, bitter depths, blanketed in olive oil and spiked with chili flakes and it sent me into a mini-delirium (despite a barely digested, two-hour lunch in my gut).

“Prego! Prego!” panted out the food bus monger excitedly, waving his hand over an array of foods with all the flourish of Pavarotti.

If you could eat it, they had it. Ribbons, coils and tubes of dried pasta, tall mounds of pistachios and almonds, bottles stuffed with regional sauces and pestos, small hills of dried fruits, cellophane wrapped boxes of marzipan and five-kilo cans of extra virgin olive oil.

Plus, big fat chunks of tuna plunged into various cans and glass bottles. None of it was packed in spring water or lemon pepper a la Starkist. It was doused in a heavy sea of olive oil, the flesh dark and beckoning.

Turns out the city of Trapani and tonnato go way back, hitting a peak in the 1600s and 1700s. Back then, and still today, the variety of tuna caught in these seas is bluefin. It swims past the coasts in May and June and is caught in a traditional series of nets called mattaza. As Italians are wont to do, they celebrate the catch with tuna festivals this time of year. And I suspect they serve up something as sublime as what food bus monger number one had in store for me.

Again: the outstretched palm. Again: my willing acceptance. I took his offering and bit into a piece of fresh tuna carpaccio drizzled with olive oil and draped over Sicilian bread.

Good ingredients. Simply served. The result was ecstasy. I had to place my hand on a pile of sun-dried tomatoes to steady myself and once revived, noticed how incredibly plump, blood-red and moist those sun-kissed tomatoes looked. Don and I exchanged raised eyebrows and the shopping began.

Choosing was difficult and the other vendor, the one hiding behind the cheese, kept egging me on. Older than his counterpart, perhaps father to the son, he had a toothless, jowly grin that didn’t necessarily enhance the pecorino – of which there was plenty, some covered in grape must, some seasoned with black peppercorn.  Wielding a large knife, he pantomimed slicing off a chunk of this or that, and before long, I was on a cheese mission.

Meanwhile, food bus monger number one kept using his four best English words, “Sandwich fantastic!  You buy?” pantomiming like his pop and offering to slice up the salami of my dreams, lay it on crostini and make it into an open-faced you-know-what.

We left with a bag full of goodies: a hunk of pecorino, vacuum packs of both sun-dried tomatoes and dried figs, and a bottle full of bright green pistachio pesto.

Of course, the food bus guys wanted us to “prego! prego!” much more than we could.  I watched their smiles shape into pouts each time I refused a slice of ricotta salata or a spoonful of rosemary honey. When I shook my head “no” to an astoundingly fragrant bag of dried mountain oregano – they looked crestfallen.

But minutes later, after money had exchanged hands and we thanked them energetically, up popped that prego again.

It was a different prego and over the week I’d discover all its elasticity.

Prego is all-purpose, capturing all the different facets of Sicilian gentility. It can mean “welcome” or “don’t mention it”,  “please” or “enjoy”.  Sometimes it’s said with a gracious sweep of the hand that implies, “after you, be my guest”.

We heard it maybe 100 times over the course of our weeklong eat-a-thon and each time we were prego-ed, we thanked our lucky stars we were hearing it in Sicily.

This entry was posted in Food in my travels, Ingredients, Photos by Donald Nausbaum. Bookmark the permalink.