Side-by-side taste testing is a gift.

Newbie bakers rarely know the difference between all purpose and bread flour, let alone this wide range of locally-grown wheat varietals with alluring names.  We taste them straight-up without butter, observing crumb, inhaling aroma, analyzing crust and interior, making mindful, slow chews, ruminating on each variety. We dub this our “munch and think” session. One is Mr. Moist, the other Crispy Crust, another so very sweet. None of these baguettes has the loft and rise produced by 100% white bread flour, but all five excel in delivering a unique, wheaty flavour.

Oh, The Baguette. This long, phallic, day-only-fresh loaf is the epitome of French bread baking and never ceases to send me into performance panic. Despite suffering years of bakers’ baguette trauma (BBT), I’m actually able to follow our instructor Jen’s shaping instruction. She demos once, twice, then for the final demo, she asks us to call out command steps for her to follow: “Place the dough good side down. Deflate. Letter fold, folding top then bottom. Observe the dough lip and seam. Use left hand to turn dough from the top of the lip over your thumb and tap closed with right palm. Repeat turn, twist and tap across the length of the dough. Turn the dough 180 degrees and pull the top side of dough to the table, pulling it over your left, lightly floured thumb and close with right palm tap. Repeat. Repeat. Repeat. Time to roll. Spread your floured fingers out wide and roll from the middle to the tips of your baguette. ”

Big breath. I return to my bench and practice. Four times.

Two out of four ain’t bad, right? I’m hesitant to attach my initialized label to the underside of these horrendous duds.

“There is no bread shame,” Jen assures, after a thoughtful examination of the first 20 baguettes that roll out of the oven. She is about to launch into a frank discussion of the flaws and achievements before her promising not to reveal anyone’s label.

“This snake swallowed a mouse,” she says pointing to my first try. “And this one, well…” She says something way less hurtful than my first baguette mentor did years ago when I was apprenticing at a downtown Toronto bakery.

“Just stop, Madeleine,” he called out to me shaping at the bench, pointing to my disastrous results.“I can’t sell any of those!”

Croissants are not easy.

In fact, I’d label them advanced with a capital A. 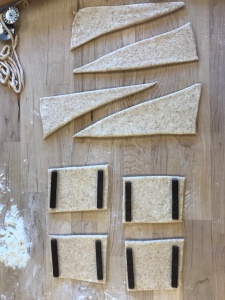 A truly delicious, flaky croissant requires three consecutive days of attention. It wants butter that contains even more fat than normal, demands lots of finicky measurements, and exponential folding. The goal is flaky, honeycomb layers totalling 54 –  if you get it right.

I’m thrilled to find “Sprouted Wheat Croissants” in my red KAF folder, because I came to this course hoping for whole grain solutions to old school deliciousness. To make eight of these crispy morsels, we use 130 gm of sprouted wheat flour and 130 gm of all-purpose (King Arthur’s, of course).

Croissant Day One, we make a simple yeasted, enriched dough and whack a 100 gram piece of unsalted, 85% fat European-style butter with a rolling pin into a thin, very pummeled five-and-a-half-inch square.  Day Two, we “lock in” our little square of chilled butter, sweetly swaddling it in the dough we made the day before. Then we get violent, methodically whacking, pounding and rolling our dough-butter combo into submission. We chill it, then whack and roll again several times. On Day Three, we roll out our sixth edition of an eight-by-16-inch rectangle, slice it into four equal parts, cutting each in half on the diagonal. Who says bread isn’t a science?

Like kids cut loose in a candy store, we adult learners happily fashion four crescent shapes and four pains au chocolat.  We each sign our name in black Sharpie pen on the parchment paper that holds our creations.  I swell with pride as I watch my croissant offspring enter KAF’s industrial convection oven, so big it can accommodate a six-foot-tall rack on wheels.  Butter aroma engulfs the room and the flaking begins.

“When a recipe says a pinch of yeast, what’s that mean?” instructor Geoffrey asks the class on Day One eliciting a dazed response.

“I mean, do you want to use two fingers or threeto pinch with?”

We respond with silence.  Just moments earlier our hallowed baking leader was talking about grams and the scientific accuracy of it all. Now we are pinching, for God’s sake.

“If your kitchen is hot and humid, you will two finger pinch. But if the room temperature is moderate, go for three. Who can tell me why?” he asks.

One of the brighter lights among us chirps out, “The hotter the room, the faster the ferment.”

“Exactly,” says Geoffrey, “Temperature and time are two big tools for fermentation. Madeleine, I’ve put a thermometer on your bench and would like you to tell me our flour and pre-ferment temperatures.”

Hands trembling, I insert the probe into the fluffy flour bin then into a silver bowl full of bubbling biga, calling out “66 and 66.5 F” to Geoffrey, who scribbles them on the whiteboard before us.

At this juncture, my brain fizzles right out. Overloaded with data, my memory stick cannot download another formula or fraction. My screen goes blank during the full 10 minutes we devote to final dough temperature (78F is optimum) and how it can be controlled through a 1,000 – step equation to determine the temperature of water we use to make the initial dough.

Luckily, after days of deliberation, I get it. If we bakers can understand and compute all the variables: temperature, time, flour attributes, leavening strength and the list goes on… we can bake on a timetable producing consistent quality. As a home baker, albeit a serious one, the science of bread can only bolster the magic of my art.

Here’s an easy yeasted bread perfect for beginners. This dough is more forgiving if you are just learning to shape a boule or batard. Plus, spelt is an ancient grain with a nice, sweet nuttiness.

Scale flours, water and yeast in a mixing bowl, mix until just combined and cover with plastic wrap. Allow to rest at room temperature for about 20 min.

Add honey and salt and mix 1-2 min or until the dough begins to develop strength. Cover and ferment for 2 hours, folding every 30 minutes.

On a lightly floured surface, shape into boules or batards an place in floured bannetons. Cover with shower caps and retard in the refrigerator overnight.

Preheat Lodgepan combo cookers in oven at 500 F for 30 min.

Flip each loaf onto a parchment paper lined baking sheet and score.