The first time I tasted cumin in Chinese cooking was in Beijing with Ling. It was the year before the Summer Olympics and we were hard at work, travelling from one meal to the next, arduously food reporting for More magazine, analyzing and recording every delectable mouthful that came our way.

The Cumin Find was at lunch. It was a rustic Xi’an-style place, with small wooden tables, rickety seats and glass panes smudged with layers of steam and dirt. We had spent a hungry, stomach-growling hour crisscrossing alleys and laneways searching for this hideaway. Ling kept our search ignited with enticing tales of hand-pulled, perfectly chewy noodles swimming in vast bowls of rich, heavily spiced lamb broth.

A smiling, pudgy cook-owner wearing a white pillbox cap and apron plonked two steaming bowls down before us while yelling something over his shoulder in Shaanxi dialect. Ling and I shared knowing smiles. This place was the real deal.

We dug in, chopsticks on the right, ceramic soup spoon on the left to catch any remnants that fell from our eager lips. Steam clouded Ling’s glasses and I could have sworn I heard her purr after each mouthful. She tried to ignore me, but my questioning was incessant.

“What you talking about?” she blurted out between gulps.

“I want to know what’s in this.  I’ve never tasted this spice in Chinese noodles before.”

I heard ziran and figured she had said “Naturally.”

I let her pause and collect her thoughts. She was used to me asking a lot of questions on this trip, especially mid-bite.  I waited. Ling continued to revel in the meal… she’d moved on to her roujiamo or Chinese hamburger. She gripped the clay-oven flatbread bun with both hands, inhaling its charcoal overtones.  Stuffed with fat, soft morsels of grilled lamb, this Xi’an wheat flatbread bun is famous for soaking up loads of gravy without falling   apart.  I watched a dribble of lamb juice trickle down Ling’s chin and detected that purr, again.

Despite the prospects of a cold lunch.  Despite the look of irritation on Ling’s almost-always angelic face, I pressed on, asking her to write down the two characters that were pronounced zi and ran. Patiently, Ling wrote down the zi character on the palm of her left hand with her right index finger, making sure I was watching every stroke as she forged the invisible ink used by Chinese when pantomiming how to write a Chinese character. She wrote ran stroke by stroke even slower this time, sensing all the ignorance painted in my blank stare.

She stopped her invisible writing and we both groaned. I hadn’t recognized any of the gibberish she had scrawled.

I knew how to write naturally in Chinese but this ziren– this ziren she’d just written on her palm – spelled out a spice that was unnaturally Chinese: cumin.

The Xi’an chef had tossed crushed, whole cumin seeds into a firey wok glistening with oil and loaded with garlic and dried, hot red peppers, elevating our simple bowl of hand-pulled noodles into a culinary epiphany for me. Cumin had seeped into the juicy lamb chunks, too, washing away any untoward mutton-ness and caressing it with a nutty, deeply Middle-Eastern allure.

I was hooked – even if the Chinese pronounced cumin like its homonym naturally.

Ling’s face was flushed. We had shared a tall bottle of Beijing beer to soothe the zing of all the hot dried red peppers flecked throughout the soup. I looked around. It seemed as if everyone in Beijing had apple-red cheeks during this cold, autumn spell. Just the day before, Ling and I had run outside the Temple of Heaven, trying to escape gusting winds that lashed against our skin like ice daggers. Our week in Beijing was to end tomorrow and Ling put down her chopsticks, wiped her chili-oil smudged lips and made a promise for Toronto.

Eleven years later, I sit in her refitted and renovated kitchen and watch Ling cook in her wheelchair. She zips from one end to the next, pulling small packages of meat from the freezer, scooping Jasmine rice from a lower bin and standing on her one leg to reach for items above the counter. I have brought her a big bag of raw cumin seeds and she rolls her wheelchair before the stovetop range and turns the front burner on high. In minutes, the beige-green seeds in the dry, hot wok turn chocolate brown and the room fills with a smoky, nutty aroma. Deftly, Ling tips the contents of the hot wok on to a plate. With a wooden spoon, I guide the seeds into a coffee grinder.

Some seeds scatter and we say “Ai Ya!” in unison.

I hold the top of the grinder down firmly as the machine whirls the seeds into powder. When I lift it off, twirls and wisps of cuminy, smoky clouds twist in the air.  Ling and I both poke our noses in the cloud and swoon.  Naturally. 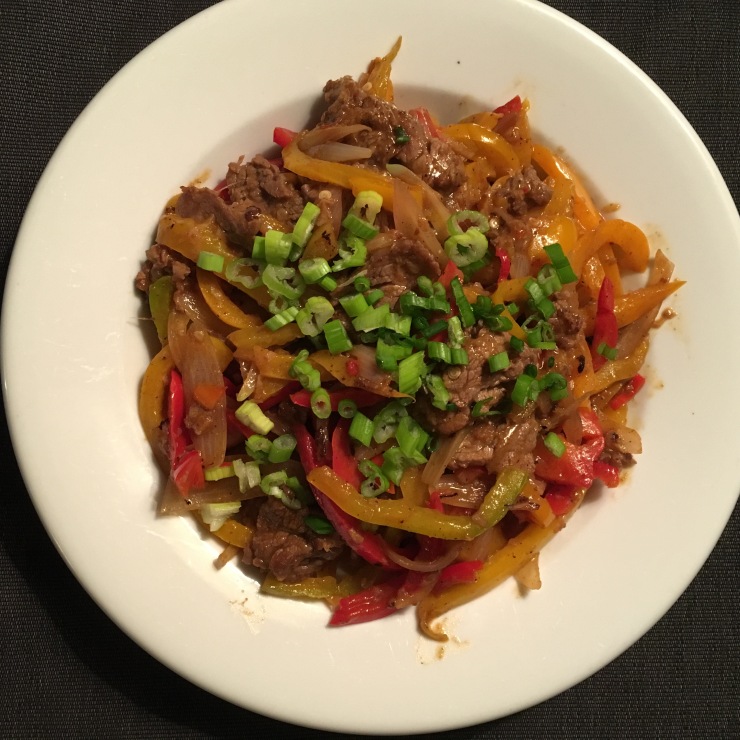 Last spring, I enjoyed many cooking sessions with Ling and her fine cook, Lina who hails from Hunan Province where they eat as many – if not more – hot chillies than they do in Sichuan. Whenever Ling purchases flank steak, she slices it up into small packages for the freezer. During the prep for a dish, Ling lets the meat defrost slightly until it’s easy to slice up sliver-thin, toss into a bowl and marinate for at least 10 min.

Slice defrosted flank steak as thinly as possible. Put in a bowl and marinate with corn starch, wine, tamari and cumin  (while you chop the veggies or put on some steamed rice).

Heat wok on high, add oil and stir-fry shallot and bell peppers with a pinch of salt until tender (about 3 min). Transfer to a plate and reserve.

Without cleaning the wok, add another tablespoon oil, put beef into the wok and pat it down flat to the surface to sear for 1 minute without stirring.  Once it is white around the edges, stir it until no longer red. Add stir-fried onions and bell peppers, fresh chili paste, chili oil and wine. Splash in some water if you want it saucier. Garnish with finely chopped green onions. 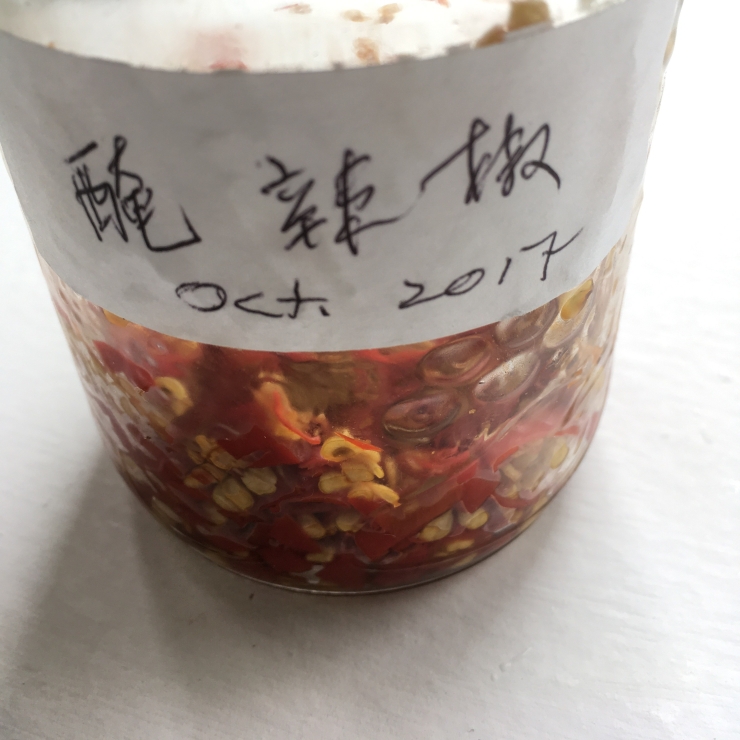 Thinly slice 20 fresh hot red peppers. Place about a third in a small glass bowl or mason jar, sprinkle heavily with salt, layer with another third, salt, and add the final layer, the salt. Add a few drops vodka.  Mix with chopsticks and refrigerate. Beware, this is HOT.