It takes balls or foolhardy abandon to organize an event and call it The Best Dinner Ever. That meant I had to go.

For a good cause, my friend Nora twisted my arm and that of others to attend. We donned sparkly, tight evening wear and put on our heels. We tried to look natural – even a little bored – before stepping on the red carpet that was laid out before the entrance.

It’s not every day you get flashed by paparazzi enroute to dinner.

That was our first clue that this might be the best ever. 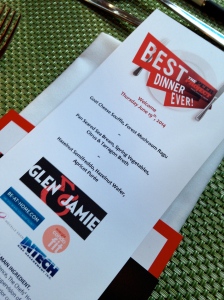 They were our hosts for the night and stood near the entrance to The Chef’s House (215 King St E) glad handing. Glen looks suave enough to be cast as the next 007 Agent.

He wears funky, thick-rimmed glasses that barely take your attention from the luxuriant tuft of red hair standing upright and three inches off his head. Both have huge poise and TV-like presence. It didn’t hurt that their faces were plastered on the water bottles. (Note to self: If you ever want to feel like a celebrity, get your face on a water bottle.)

Seconds after a warm handshake with the awesome duo, I was presented a champagne glass shimmering with bubbly Prosecco and topped with a fat, strawberry-slice-floater.

A young server wearing a baby-blue tie and crisp, beige shirt held steady both the tray and his smile as I pointed a camera lens in his direction. A bastion of servers stood in the wings, all wearing silk ties that popped off their uniforms in bubble-gum pink, key-lime green and Dijon-mustard yellow. An über clean stainless-steel, open kitchen sparkled in the background offset by an army of tall, white chef hats huddling about.

Tonight’s venue was anything but under-staffed. The Chef’s House is a training ground for hospitality workers – servers, bartenders, hosts, cooks and dishwashers all put their lessons into motion here. We were their guinea pigs. And this was an apt pairing when raising awareness and funds for The Peer Project.

As newbie chefs-to-be scrambled to plate over a hundred goat cheese soufflé appetizers,

equally young-to-the-trade servers brought plates to our table, while others fumbled and squeezed awkwardly around our shoulders to pour Chef House Label Caves Spring chardonnay into our wine glasses. It was a ballet of sorts. Sometimes the pirouettes were graceful and other times, not. Yet none of this deterred the conversation with the young man at my left from being anything less than riveting. 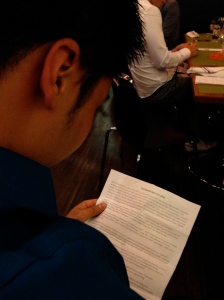 Charlie Lo had a small case of the jitters. He was about to stand up and give a speech to this hundred-dollar-a-seat-audience and tell us his story. Twelve years ago, a Peer Project mentor coached eight-year-old, fatherless Charlie into believing something radically different than anyone or anything was telling him at the time. He told Charlie to believe in himself, to have dreams and to fight for them. That, despite his learning disability and the uninspired words of his middle school teacher who said he wouldn’t amount to anything. That, despite the support and love of his single mom who was fighting breast cancer and was equally vulnerable, newly immigrated to Toronto and not an English speaker.

Charlie’s the kind of guy who will flash you a smile while saying some of the saddest things. He’s got an adorable mannerism of shrugging and squirming about in his shoulders like he’s trying to get out of a straightjacket, then he tosses back his head in relief and you know he’s traded in all that discomfort for a piece of bliss.

It didn’t hurt that Charlie knew just about everyone in the room. Before and after his heartrending speech, our conversation was interrupted incessantly by bear hugs and handshakes from passers-by,

So I turned to vivacious Laurie on my right and listened how she’d crawled off to Energia Athletics on the Danforth in the middle of the night to cycle through her 3 a.m. volunteer shift at Energia’s annual 24-hour Spin-A-Thon to raise thousands for this very cause. She not only believes in The Peer Project enough to spin through the night, Laurie, a psychologist, refers many of her young clients to this non-profit.

Sadly, the wait-list is long – 400 names long – and thus, the need to fundraise and eat The Best Dinner Ever which had moved into the second and most successful course:

seared fillets of sea bream in a tarragon-citrus broth with a tangle of spring veggies.

Not everyone at our table had dined at The Chef’s House before. I go so far back that I remember its previous incarnation on the other side of the street, Siegfried’s Dining Room, a much less glitzy, almost stogy venue where I enjoyed many an inexpensive, yet delicious repast served by students.

But the problem with students is their timetables, course limitations and school rules – two things that can really get in the way of a long, leisurely meal with endless refills of wine and merriment. Once the raffle tickets had come and gone, 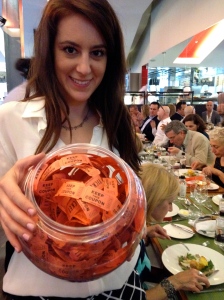 with happy winners racing to claim gift baskets spilling over with chocolate, wine and Bread by Mado (yes, this is a plug) the rest of us losers sat miffed, ready to drown our sorrows.

The head instructor delivered the bad news by microphone. Chef’s House was closing shop. According to the institution’s curriculum, it was time for the students to tidy up and go home. Luckily the three-piece jazz trio “The Sixth Street Trio” serenaded us with guitar, bass and saxophone as we trailed out the door, saying farewell to Charlie, The Peer Project and a dinner that was the best for many a philanthropic reason.

One thought on “The Best Dinner Ever”