I bought my first fava beans on the Danforth, years back when Fruit King still stood on the corner at Logan. They were big beans.  You couldn’t really miss them when perusing the usual green grocer contenders, be it potatoes, carrots or spinach. But in this basket was a stranger. Unlike their skinny cousin, the humdrum green bean,  fava beans were bulging, army-green giants with shiny, leathery skins and brown, pointy tips.

Eternally curious when it comes to fresh produce, I stood staring, incredulous at these five-inch-long, soft and spongy beans until I took a sharp elbow in my side from an elderly Italian woman dressed in black, head to toe.

No, it wasn’t an elbow, it was the corner of her shopping basket that she was in the process of shoving between herself and me as she stretched out one determined little hand towards the pile, ferreting out the greenest, plumpest ones.

“What are these?” I asked and she spat out  “fava” like it was a revolting, dirty word. Then she stopped for an instant, looked up from her clutch of beans and examined my ignoramus face just long enough for me to instantly understand the meaning of “evil eye”.

I decided to move towards the spinach and declined fava that day.

Fast-forward to now. My fridge is full of Ziploc bags stuffed with freshly picked fava beans from my Cowichan Valley garden. These aren’t any, run-of-the-mill fava beans, these are organic beans from bean grower Sal Dominelli on Gabriola Island.  He’s dubbed this fava variety “Exhibition Longpod Fava” and instructions on the seed packet called for sowing in “early spring”.

Owing to the carpet of snowbells under the magnolia and the clutch of daffodils ready to pop in our courtyard, I figured the cold wet soil of mid-February was ready to receive these seeds (dried, brown fava beans).  Amid the fog and incessant rain, I tucked them one-by-one into the soil telling myself the heavy layer of wet, chestnut leaf mulch would keep them warm enough to germinate.

Two months later, the bean stalks were already 18 inches high and needed stakes. In March, they had  white flowers with big black eyes.

In June, long, fat beans were growing up towards the sky.  The phallic nature of my crop almost had me blushing.  A hiking friend and fellow farmer sagely shared “they’re ready to pick when they drop down.”

Meanwhile, back in Toronto, my favourite wannabe-Italian, Randy of Scottish origin, had already tucked into fresh fava flown in from Italy that he’d purchased on the Danforth. Toronto was experiencing its usual lack of spring with a heat wave in late May.

“All day long, I can do this!” Randy enthused, sitting outside on his new deck, his mouth full of Pecorino cheese and freshly shucked fava, savoured with a “young Chianti, slightly chilled”.

My hiking friend shook her head and sighed when I told her of this flavour pairing.

“Anything tastes good with wine and pecorino,” she scoffed.

Randy, I explained, was a dedicated  fava aficionado.  Who else but this mangiacake would de-robe the fava, not once, but twice, before he ate it?

My fellow fava farmer wasn’t listening to any of this gibberish, knowing full well the work and time invested in simply growing these beans. Shucking fava from the pod was an add-on compared to the ease of  bean brethren like snap or pole, who are ready to cook right off the vine. 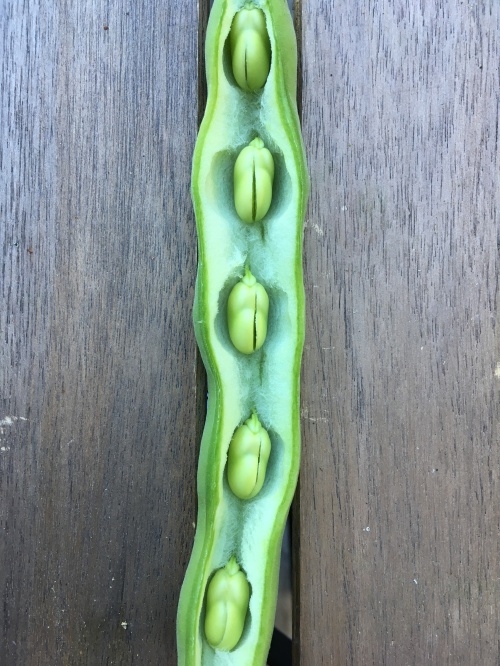 Once shucked, the spongy fava casing reveals a loveable row of five to six, light-green-tinged beans each sweetly indented. I shucked out bowl after satisfying bowl full of beans and carted away bags full of fava shell refuse for the compost.

Scientist that I am, I measured my harvest. Ten cups! Was I up for Randy’s second peel out?

I gave a couple of beans a good try only to discover that the tight skin encasing each bean needed a small knife or long fingernail to remove it. Even still, I was nicking and separating the inner goodies. The process per bean, took the same amount of time as it did to simply shuck one pod and see five to six beans drop out.

It was, in the wise words of my engineer father, “A statistical nightmare!”

Unless you are Randy who awaits fava season with bated breath, ready to shuck all pods then tenderly hand-peel, each and every individual bean that comes his way. Last time we spoke, he cautioned me against over-cooking, too, suggesting that no fresh fava bean should be sautéed for more than a minute.

No wonder I reached for a glass of chianti when pondering culinary creations for the multitude of green orbs lingering in my fridge. I crowded Arborio rice with the, um,  little buggers to create a risotto failure that even my carb-loving husband declined. I made a luscious Mexican black bean soup and finished it with a scattering of fava, cooked only a minute or two (following you-know-who’s recommendation). The fava beans bobbed in the soup like buoys and I watched my guests politely skim their soup spoons around them.

Finally, I had a fava epiphany, based on the cooking laws of terroir and desperation. My garden was spilling over with not just fava but an heirloom, purple streaked pole bean called Dragon Tongues. Wouldn’t they be perfect with the fresh pattypan squash I had pounced on at the Duncan farmers’ market that day? The cooking gods and I collaborated on a very fusion, very vegan dish that can be served hot over rice like a curry. Or it can be served French haute at room temperature, just like a Provencal ratatouille, tucked inside a lettuce leaf and garnished with toasted pumpkin seeds. C’est ca.

No matter what you do, be sure to serve with wine.  While Randy’s go-to is Chianti, he also recommends two crisp Italian whites: Vermentino di Sardegna or Falanghina.

And if your larder isn’t plum-full of fava and dragon tongue pole beans, substitute fava with lima beans, and try yellow wax string beans instead of the heirloom variety. Raise a glass to Randy and remember that 2016 was the International Year of the Pulses.

If you are obsessed enough, consider pulling out the just-cooked fava beans and squeezing each one out of its jacket, returning the deep green fava hearts to your curry. (Use my name in vain if you burn your fingers.) Like most curries, this will taste best the day after you cook it. Leftovers freeze well.

1 cup tomato puree or passata (I like Mutti brand)

I don’t think there is anything I make more regularly and with more satisfaction than soup. I never make a small pot, I always go big because soup is a mainstay of my diet and freezer. So is bread. One and one equals dinner or lunch, from season to season.

My friend Karen recently gave me a box full of pantry goodies.  She was cleaning out her gourmet cupboards for a move and decided she’d rather give me toys for my culinary sandbox  than put them in storage and out of usage for half a year.

“Mostly flavoured vinegars and lentils,” she droned, then spiced it up with “there’s a bottle of truffle oil, some wasabi and white Chinese fungus.”

It was the lentils that sung out for soup.

Yet… lentils left to their own devices can create the most boring soup in the universe.

Under the spin of magic, lentils can also offer up mouthfuls of rich vegetarian Soup Bliss that is so complex, you’d want to shoot the writer who just wrote the last line’s blasphemy.

One such soup can be found in Myra Goodman’s delectable tome “Food to Live By: The Earthbound Farm’s Organic Cookbook”.  Her Mediterranean Lentil Soup is layered and rich, despite missing one of the most quintessential ingredients found in my soups: homemade chicken stock. To make matters more envious, this lentil soup reaches the finish line with nary a piece of bacon, prosciutto, ham, pancetta, sausage or speck.

I couldn’t do it. My copy of that cookbook was in the wrong city’s kitchen and none of its magical equation could be dredged up from the swamps of my memory.  Meanwhile, evil cooking gnats were hissing and spitting in the dark gutters of my hesitation, taunting with incantations of “You’ve got drab lentils, drab lentils!”

Thus, I gave my blonde curls a good shake and pulled out the bacon.

This in tribute to what I imagine was either a Spanish scam or one of Karen’s most luxurious food purchases ever.  Here was a bag containing just three cups of brown lentils with two, not one, $25 price stickers.  Highway robbery! I had to give these Mexican lentils the respect Karen’s wallet deserved, so I pulled out the big guns: a litre of freshly made chicken stock, simmered for 8 hrs on my backburner the day before.

First, a quarter pound of PC Applewood smoked bacon which went into a large hot pot shimmering with olive oil.

Next, a very crisp Walla Walla onion (love our Stateside produce from Washington), two stalks of celery, followed by a red and green bell pepper. Next, I cracked open a 796 ml can of no salt-added, organic “Terra Dolce” tomatoes that I bought – brand unknown – at Costco, gambling on a whole box that has delivered thrice the flavour for all its economy. Finally, in went a cup of Karen’s precious lentils washed and drained, followed by a litre of chicken stock.

Despite the bacon and homemade chicken stock, these lentils were heading perilously close to the oblivion of bland and comprehensive seasoning was in order.  I started by squeezing five cloves of roasted garlic into the brew, and chuckled with a witch’s glee as I rubbed two teaspoons of dried oregano from Karen’s box. No truthfully, I cackled, because Karen’s dried oregano is wickedly strong and full of oomph compared to the dross I had just given the sniff test from my spice cupboard.

Once I had dumped my old oregano stash into the compost pile, I was ready for more foraging through flavour-land (a.k.a. my spice drawer).

A fat pinch of smoked paprika, a teaspoon of Club House ground cumin, one “DAN-D-PAK” hot, red dried pepper from Gerrard Chinatown, half a teaspoon of mild chile guajillo molido from Kensington Market, one chopped fresh green serrano pepper, half a cup of chopped fresh coriander and juice from half a lime. Because my stock is made without salt, I added a teaspoon of course Mediterranean sea salt from Italy, straight from Karen’s box (but without a price tag).

In less than half an hour, a scrumptious soup was born. Esta la vita!

This is a spicy, full flavoured soup that brings lentils out of the pantry so they can live a little.