I don’t think there is anything I make more regularly and with more satisfaction than soup. I never make a small pot, I always go big because soup is a mainstay of my diet and freezer. So is bread. One and one equals dinner or lunch, from season to season.

My friend Karen recently gave me a box full of pantry goodies.  She was cleaning out her gourmet cupboards for a move and decided she’d rather give me toys for my culinary sandbox  than put them in storage and out of usage for half a year.

“Mostly flavoured vinegars and lentils,” she droned, then spiced it up with “there’s a bottle of truffle oil, some wasabi and white Chinese fungus.”

It was the lentils that sung out for soup.

Yet… lentils left to their own devices can create the most boring soup in the universe.

Under the spin of magic, lentils can also offer up mouthfuls of rich vegetarian Soup Bliss that is so complex, you’d want to shoot the writer who just wrote the last line’s blasphemy.

One such soup can be found in Myra Goodman’s delectable tome “Food to Live By: The Earthbound Farm’s Organic Cookbook”.  Her Mediterranean Lentil Soup is layered and rich, despite missing one of the most quintessential ingredients found in my soups: homemade chicken stock. To make matters more envious, this lentil soup reaches the finish line with nary a piece of bacon, prosciutto, ham, pancetta, sausage or speck.

I couldn’t do it. My copy of that cookbook was in the wrong city’s kitchen and none of its magical equation could be dredged up from the swamps of my memory.  Meanwhile, evil cooking gnats were hissing and spitting in the dark gutters of my hesitation, taunting with incantations of “You’ve got drab lentils, drab lentils!” 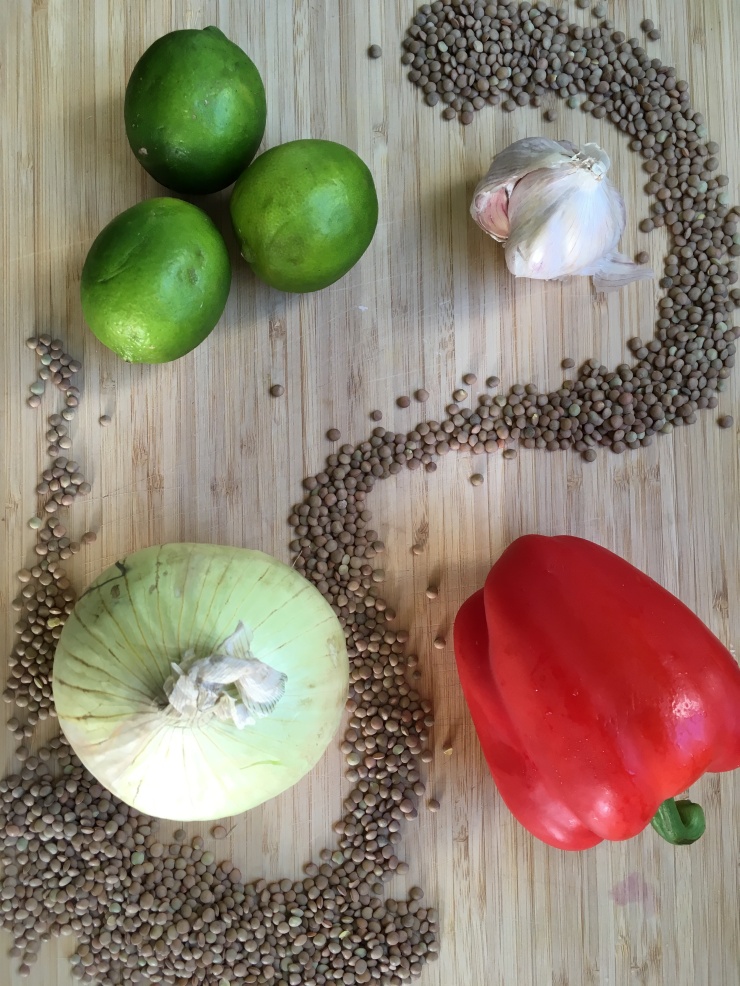 Thus, I gave my blonde curls a good shake and pulled out the bacon.

This in tribute to what I imagine was either a Spanish scam or one of Karen’s most luxurious food purchases ever.  Here was a bag containing just three cups of brown lentils with two, not one, $25 price stickers.  Highway robbery! I had to give these Mexican lentils the respect Karen’s wallet deserved, so I pulled out the big guns: a litre of freshly made chicken stock, simmered for 8 hrs on my backburner the day before.

First, a quarter pound of PC Applewood smoked bacon which went into a large hot pot shimmering with olive oil. 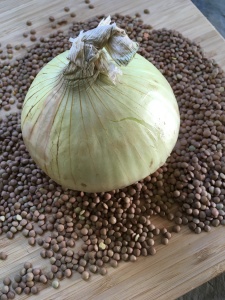 Next, a very crisp Walla Walla onion (love our Stateside produce from Washington), two stalks of celery, followed by a red and green bell pepper. Next, I cracked open a 796 ml can of no salt-added, organic “Terra Dolce” tomatoes that I bought – brand unknown – at Costco, gambling on a whole box that has delivered thrice the flavour for all its economy. Finally, in went a cup of Karen’s precious lentils washed and drained, followed by a litre of chicken stock.

Despite the bacon and homemade chicken stock, these lentils were heading perilously close to the oblivion of bland and comprehensive seasoning was in order.  I started by squeezing five cloves of roasted garlic into the brew, and chuckled with a witch’s glee as I rubbed two teaspoons of dried oregano from Karen’s box. No truthfully, I cackled, because Karen’s dried oregano is wickedly strong and full of oomph compared to the dross I had just given the sniff test from my spice cupboard.

Once I had dumped my old oregano stash into the compost pile, I was ready for more foraging through flavour-land (a.k.a. my spice drawer). 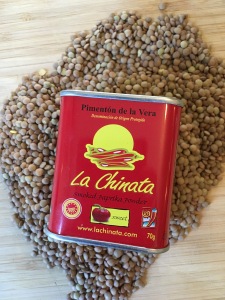 A fat pinch of smoked paprika, a teaspoon of Club House ground cumin, one “DAN-D-PAK” hot, red dried pepper from Gerrard Chinatown, half a teaspoon of mild chile guajillo molido from Kensington Market, one chopped fresh green serrano pepper, half a cup of chopped fresh coriander and juice from half a lime. Because my stock is made without salt, I added a teaspoon of course Mediterranean sea salt from Italy, straight from Karen’s box (but without a price tag).

In less than half an hour, a scrumptious soup was born. Esta la vita!

This is a spicy, full flavoured soup that brings lentils out of the pantry so they can live a little.