I bake and give away a lot of freshly baked bread. I’ve been baking bread weekly, sometimes daily, for many moons and my floury perspective has offered insight on what Joe Eater likes best in the bread department. And it’s challah, hands down. 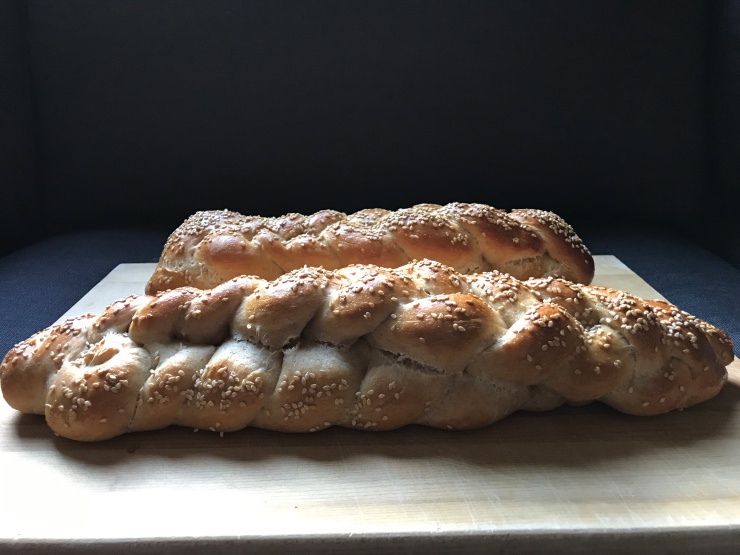 Essentially, we bread lovers eat with our eyes first. Appearances matter.  Just the sight of one of my golden, glossy braids is enough to bring most of my beneficiaries to their knees. Sprinkle on some sesame or poppy seeds (or both) and you’ve got a bagel hybrid that screams for a slathering of cream cheese,  followed by an unabashed crescendo of jam.

“What’s not to love?” my Long Island New York mother-in-law used to ask.

Ethel, of course, would only take a sliver of a slice, knowing full well that the honey, milk, butter and eggs that enrich and enliven challah were the kiss of dietary death for a diabetic like her.  But that wouldn’t stop her from kveln about my challah.

My friend Danny, on the other hand, used to scrunch and contort her mien whenever she came face to face with one of my challahs.

“No! No, you can’t do this to me!” she’d wail, tossing the gift loaf back into my hands like a hot tamale.

Turns out she was an addict.

Then there was Don. He ignited my baking passion and passed the challah gene down to our offspring.

I’d find him drooling and star struck, gazing with deep longing at my just-out-of-the-oven golden, glossy loaves.  I’d start wielding my bread knife, slashing it through the air, marking the end of each word with a vicious swipe   “Don’t you dare” Slash, slash, slash!  “devour it all!”  He’d feign to cower then leave only crumbs in his wake. 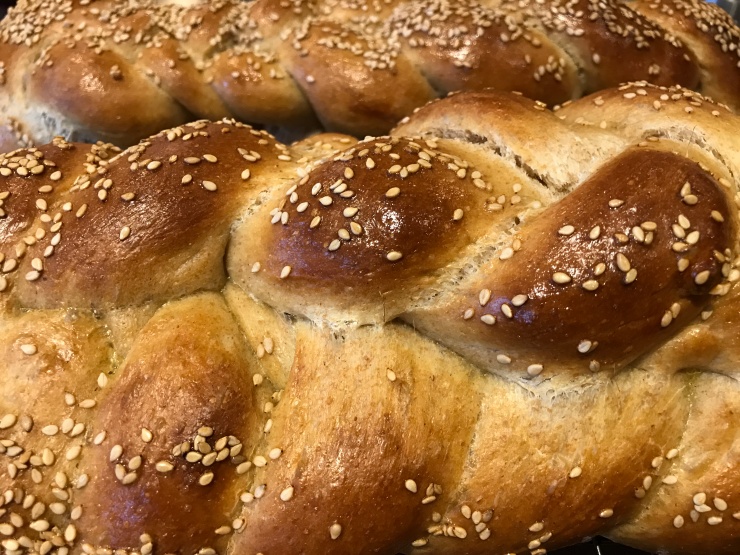 Oh, the allure, the gloss and glimmer of a challah’s golden crust, twisting and turning seductively before our hungry eyes. Blessedly for us bakers, it is a no-brainer of a baking feat. Sure, you need to have the larder well stocked with milk, honey, eggs and butter, but you’ll find the braid an easier dough trick than your average high hydration, Tartine-style boule.

What’s more, this is a bread recipe that will make you a baking icon among friends and family. You don’t have to capture wild yeast for 10 days to make this baby rise and if you practice this just once, you’ll soon be a baking pro worthy of  Zoom coverage at the socially-distanced table.

But before you plunge into this bake, let’s talk flour:  Seriously good flour, that’s local, freshly ground and can be delivered to your door. 1847 Stone Milled Flour https://1847.ca  produces a variety of organic stone milled flours in Fergus, Ontario that bring this challah out of the land of white bread and into a world of healthy, rich flavour. 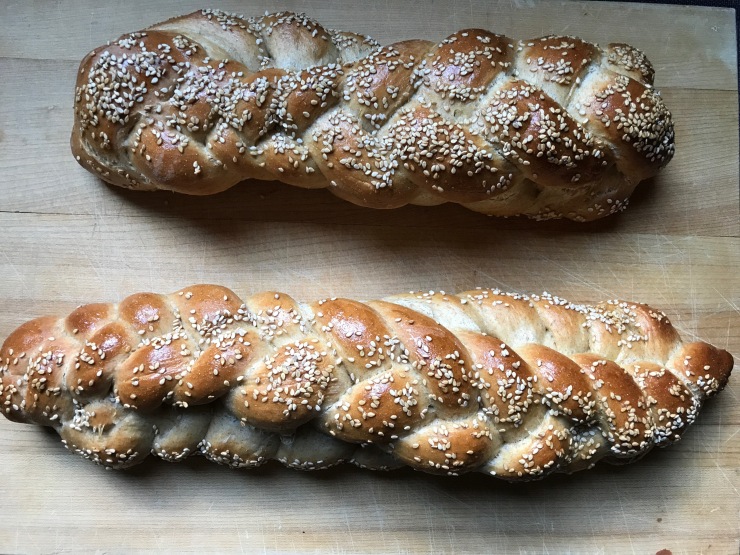 Despite the name, this challah recipe doesn’t date back to 1847. I created it  recently to feature 1847’s Red Fife and Daily Grind, but both of these whole grain flours can be substituted with other brands.

Combine all the Sponge ingredients in the bowl of a KitchenAid mixer using the paddle attachment until just mixed. Cover and leave at room temperature for 2 hrs or until the surface is covered with small holes, just like a sponge.

Add butter, salt, Daily Grind and all-purpose flour to the sponge.  Using a dough hook, mix for 8 min or until the dough balls up around the hook. Add a tablespoon or two of flour during the last 2 min of the mix if the dough is not pulling away from the sides of the bowl.

Transfer to an oiled plastic bin with cover for a bulk ferment (or proof) of 2hrs. (Alternately, slow down the ferment and put it in the fridge overnight for 8-12 hrs)

Line two baking sheets with parchment. Place the room temperature or refrigerated dough on a lightly floured surface. Use a dough scraper to cut in half.  Cut each half into thirds. Roll out each piece to create six long ropes. Make two simple braids with three strands each and place on baking sheets. Cover with a clean dish towel or oiled plastic wrap and let rise for 1 hour or until doubled in size.

A scraper is your best friend, especially if you have two

First, we bakers need a white, plastic scraper with King Arthur Flour’s logo embossed on the surface. It’s light and flexible, a strong yet perfectly calibrated plastic that bends in the grip while its curved edge scrapes clean each bowl of messy dough we mix. We find it tucked inside our red recipe folders, compliments of KAF. My bench partner leans over and whispers, “Complimentary now, huh? I think I stole one before. Can’t bake without it.” 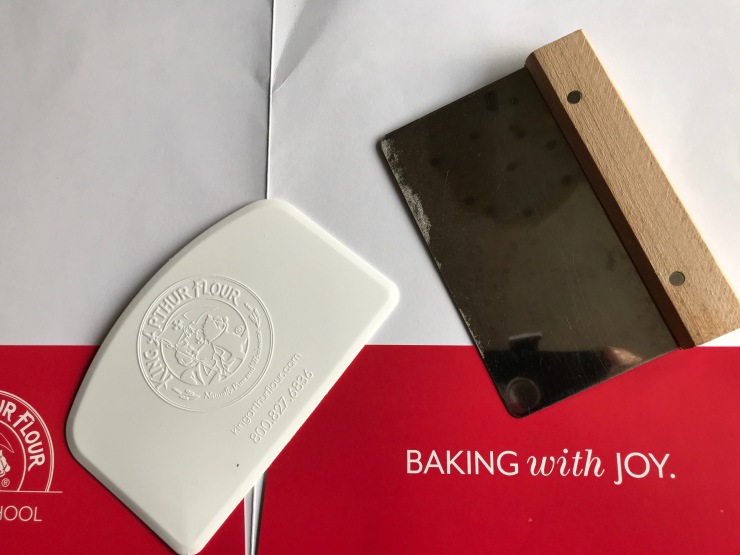 Instructor Geoffrey intones, “Dough is always sticky” and demos a clean scrape, lifting a mass of Multigrain with Biga dough in big chunks to the bench (a.k.a. our working surface). Once this dough hits the wooden bench it does exactly as expected. It sticks.

Enter scraper number two. It’s a big piece of stainless steel with a wooden handle and a straight, six-inch edge, sharp and strong enough to cut bulk mounds of dough in clean strokes or measure rolled-out rectangles of dough to the required specs. Better still, it cleans off that ever-present mixture of flour and water that accumulates on our wooden benches incessantly.  Wet dough leaves scat. We bakers obsessively scrape it away (following the wood’s grain if your bench partner suggests). If time permits, we use it to scrape clean our white plastic scraper, too. 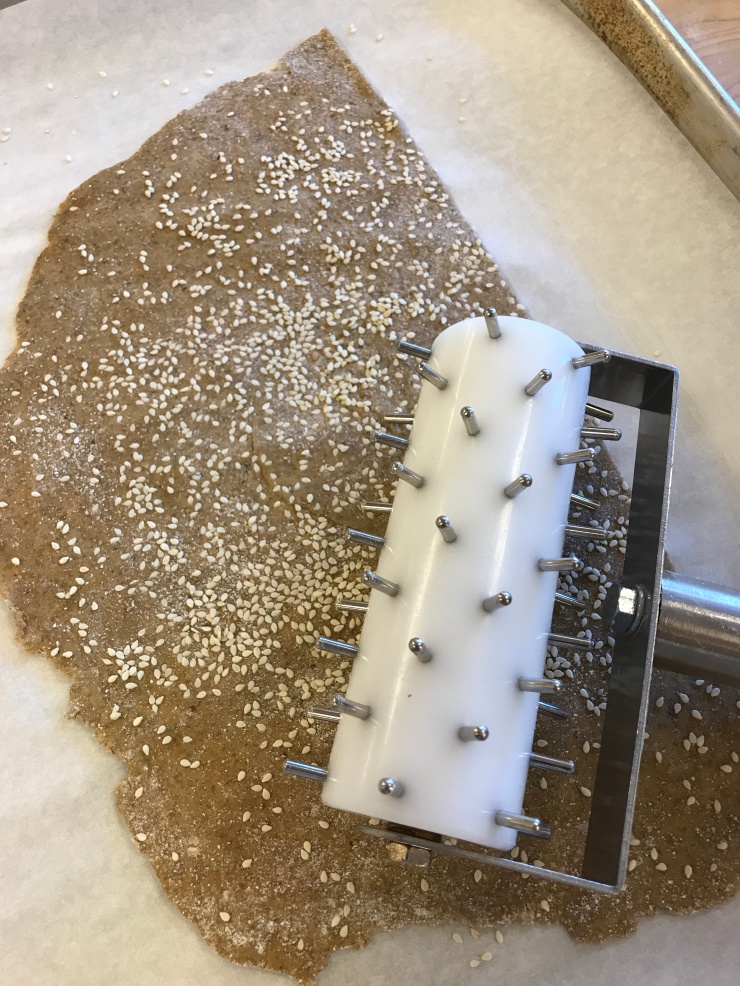 A docker has nothing to do with boats.

A mysterious tool is on display at the front of the classroom. We are watching Geoffrey demonstrate “Caraway Rye Crisps”. It’s our first baking venture on Day One of the KAF course and Geoffrey doesn’t touch the docker, leaving me curious. I drag this massive white roller flecked with nails across a sheet of freshly rolled-out cracker dough. Instantly, this torture device tears my carefully rolled out dough into shreds.  I opt to make lavash and use a fork to finish the work

According to Jen, our Day Four instructor, dough muscle can vary in strength from loosey-goosey to weightlifter tight.  Day Four happened to be Halloween and Jen is dramatically dressed as a pre-Industrial baker in a floor length dress and apron, her long hair wrapped beneath a layered scarf. Jen points to her clenched fist and dabs the pad below her thumb.

“But this,” she says pointing to her flabby underarm muscle that’s impossible to see under the billowing waves of her costume’s fabric, “is absolutely not!”

Geoffrey’s approach to dough muscle did not include his or anybody else’s body parts.

“Dry, never water-wash your gooey hands,” instructs Geoffrey as he dunks his fingers into a nearby bin of flour, a cloud of flour lifting up. He pulls them out slowly, and methodically rubs off all the gnarly bits into a waste-bin below. He waves his dry, but still visibly floury and crusty hands in our direction and chuckles. 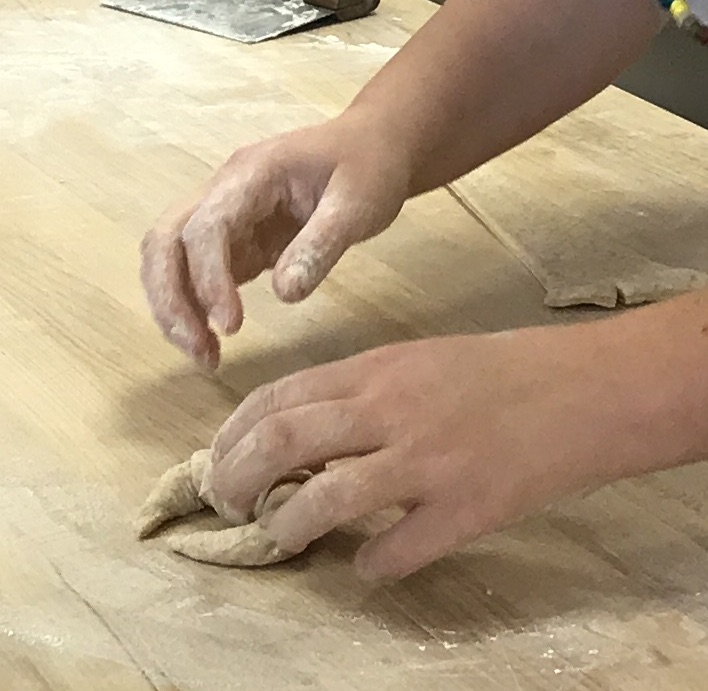 Dough texture – and dough muscle – changes all baking day long.  Once fermented or proofed, we poke it again to test strength. Geoffrey calls this “the doorbell ring.” Depending on the bread type, we see that poke spring right back up, leave a deep indent, or something in between.

A baker’s touch is as vital as a tasting spoon, worth every sticky, messy, floury imprint it makes on our minds.

Scale it and tare it.

Baking relies on precision. Flour measured by volume (with measuring spoons or cups) is not recommended. Our individual baking stations are each supplied with a big black scale. Geoffrey says he prefers metric since “the math is easier and grams are more precise.” Bakers are constantly making computations, whether it is tripling a recipe or cutting an industrial mix into one-fortieth of its original size. Those 16 Imperial ounces in a pound just add confusion to the tally.

We start every recipe by measuring out all our ingredients on the scale. 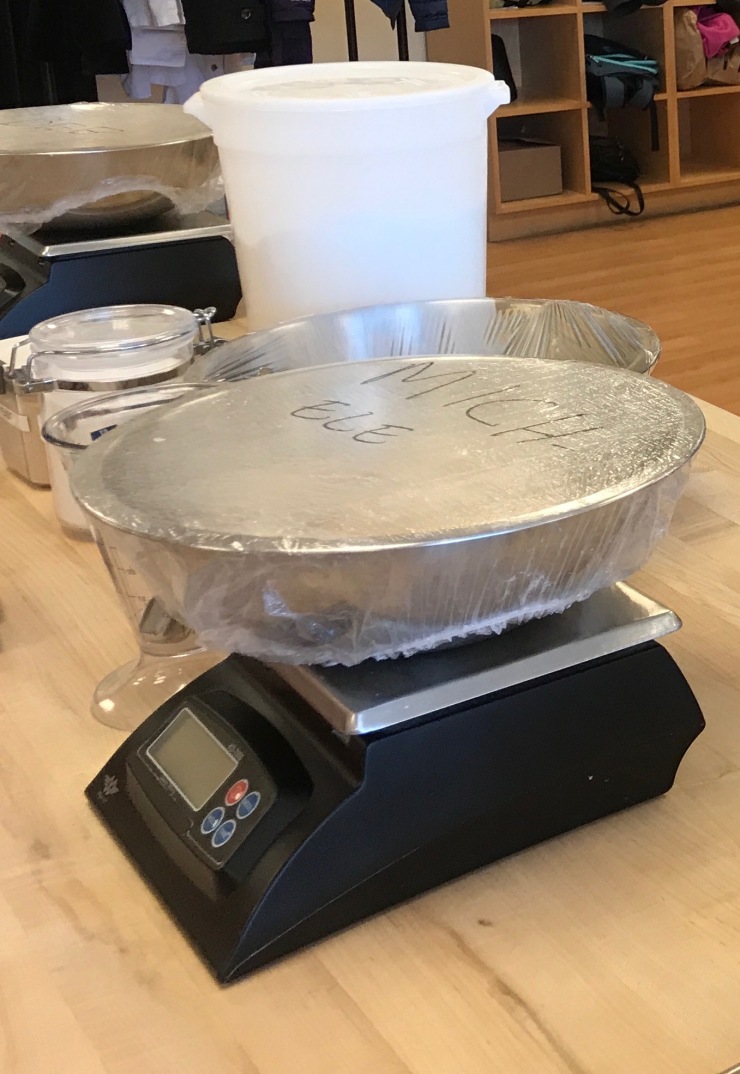 “The tare button is our best friend,” instructs Geoffrey. “Or it can be the opposite.” As soon as we put an empty mixing bowl on the scale, we tare and the screen returns to zero. We spoon in all-purpose flour and tare. We add rye and tare. We rely on the tare button to refresh the screen and weigh each ingredient separately, but if you inadvertently tare mid-stream, or worse still, your scale times out and goes blank, you can find yourself looking at a huge bowlful of  ingredients containing, God forbid, an unmeasured ingredient that can ruin the whole lot.

Scaling liquids is also tricky. The numbers on a scale just can’t keep up with a fast pour. Better to measure liquids separately and slowly. Scaling gooey blobs of honey or molasses is terminally slow and messy. Handy trick? Use an oiled spoon and honey or molasses slides off effortlessly. Worse still, tiny morsels of instant yeast (living time bombs, in the world of leavening) are so light and airy our scales can’t discern their 1 gram increments. As a result, we bakers sometimes have to ditch science and use our senses instead. It’s that combination of these two forces – one scientific and the other learned by the senses—that creates the mighty and delicious alchemy of baking.

(To be continued, next week) 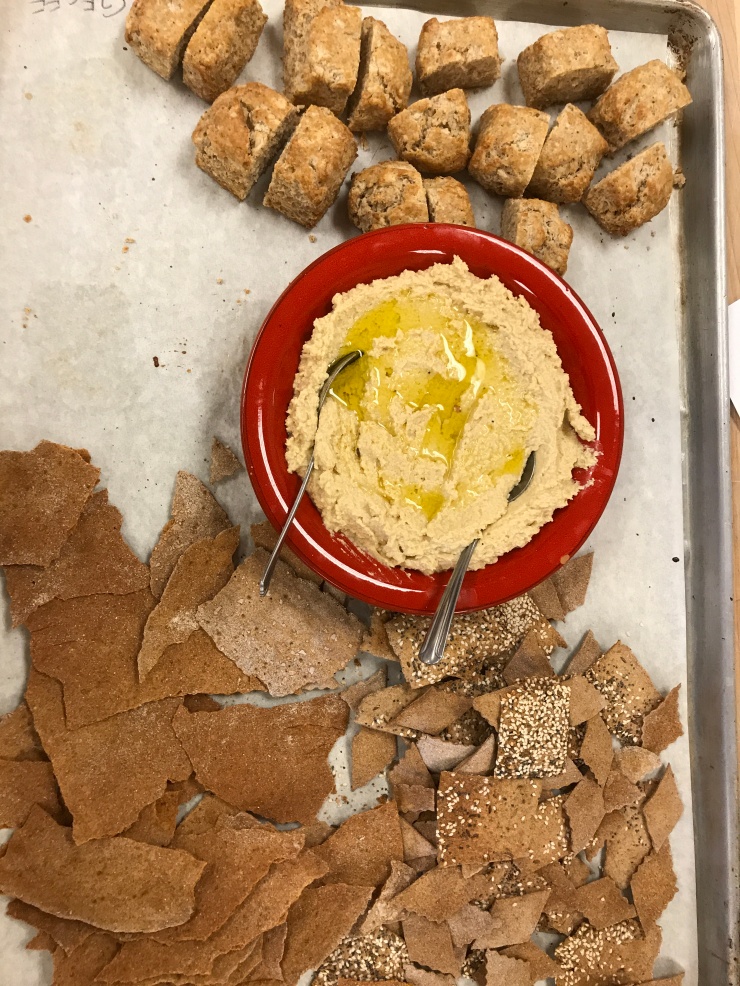 Adapted from “Caraway Rye Crisps” this recipe highlights rye’s awesome flavour and is a no-brainer, requiring next to no kneading nor any yeast.  Go ahead and cut these into fussy rectangles for traditional crackers but I prefer baking this out in two large sheets and dubbing it lavash.  Once cooled,  break into long, random sticks and serve alongside dips, paté or cheese.

In a large bowl, combine all purpose, rye, baking powder and salt. Using a pastry blender, cut in butter until it resembles coarse meal. Scale water in a bowl, tare, and scale in molasses by drizzling from an oiled spoon.  Add liquids to dry and combine with a curved edge plastic scraper kneading into a rough dough. Wrap in plastic, flatten into a disc and refrigerate for at least 15 min.

Place the disc on a lightly floured surface, cut in half and roll out each to 1/16thinch thickness.

Transfer to parchment lined baking sheets. Sprinkle with salt, chili flakes and rosemary and use the rolling pin to press in gently.

Bake 9-12 min or until golden brown.  Transfer to a rack to cool.  Break into pieces, if desired. 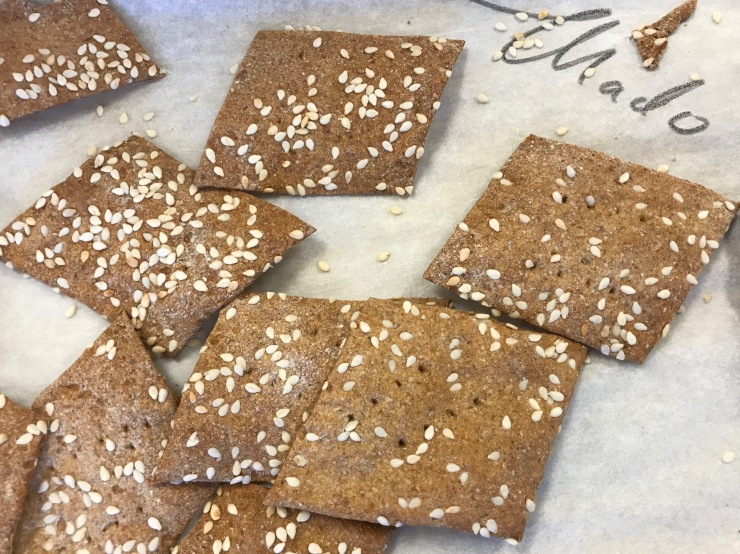 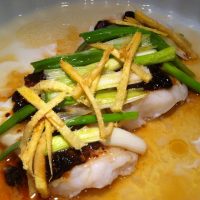 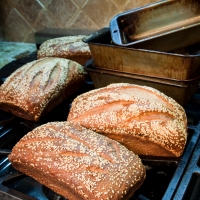 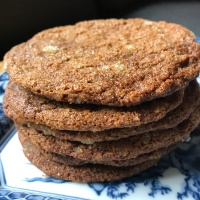 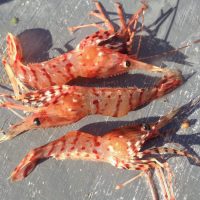 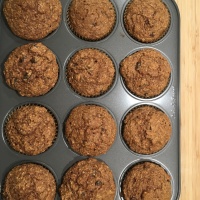