Sometimes you just have to go to a conference to feel like a professional.

That’s why I recently found myself in a downtown Montreal hotel surrounded by over 150 food bloggers – a handful of which were men and the majority under-40 females who could simultaneously post on Instagram, Pinterest and Twitter faster than I can crack an egg.

I felt challenged, so to speak, but wanted to be surrounded by “my tribe” even if I didn’t know the difference between Tumblr and Flickr and was the only person in those sessions keeping notes by muttering (cupped hand over mouth) into my iPhone voice memos.

It started off well.

Some 20 of us bloggers were in an expansive conference room on Le Westin’s 11th floor with floor-to-ceiling windows learning about the artistry of light. Our leader, food photographer extraordinaire Andrew Scrivani was patiently helping a roomful of DSLR neophytes use their cameras, assisted by two Montrealers: food stylist, chef, blogger and cookbook author Aimée Wimbush-Bourque and food photographer Tim Chin .

“Food bloggers are driving food industry advertising,” proclaimed Scrivani in his New Yorker accent – all the while smiling like a wistful Nonna serving up hand rolled pasta – as he clicked his way through a slide show of his work. Each shot was a true masterpiece and ingeniously instructive. Frame by frame we learned how to prop, “stalk the light” and create a “strategic mess”.

Then it was our turn.

Scrivani parceled us up into five small groups and instructed us to pick out a selection of food and props piled high at the side of the room. Before long I was sharing lens and lighting tips with Looneyspoon’s Greta Podleski  and trying out the portable smartphone photostudio by Foldio with Marsha the  You Gotta Eat This blogger.

You know what they say about too many cooks spoiling the pot? Not this time. We-the-bloggers gently prodded and poked a stalk of Brussels sprouts, pears and ground cherries to create what Scrivani called “hyper reality” using the light (nothing beats natural) and a selection of Scrivani endorsed props “full of patina and age” because, as the master decreed, “we are selling emotion.”

That’s exactly what I felt when I opened up my ten-pound swag bag after the photo session. I had lugged its hulking, burlap mass across town in Montreal’s eternally over-heated Metro to my Airbnb pied–à–terre. After which, I needed a drink.

Fortunately, water bottles were heavily represented. Not only was I the recipient of a S’well insulated stainless steel water bottle made by the water faucet people at Delta, but I could be entertained for weeks tucking different fruit and vegetable combinations into the infuser insert of my Half Your Plate sippy-style and foot-tall water bottle.

But it was the Food Network amp charger that really got me going. Who knew that a little white box and cord could elicit such admiration? I delved into its Lilliputian manual and quickly understood that this lithium baby was going to keep my iPhone battery in the green for all those long days of out–of-office, mobile blog work ahead.

Me, and my brand, were pumped!

And nobody seemed to know more about branding at this conference than the one-name wonder Ricardo, our keynote speaker who was happy to stand in front of the adoring crowd and say without a note of regret, “I am controlled by women.” 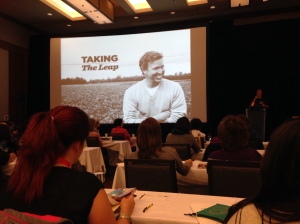 Which can’t be a bad thing from where he stands, at the helm of a Montreal-based food empire primed to take over English Canada and the world.

“Taking the leap” was the inspirational theme of 47-year-old Ricardo’s presentation.   His lilting accent, suave looks and self-deprecating style all combined to hold the room spellbound. In over just two decades, this ambitious, high-energy, self-trained cook has mesmerized TV viewers with over 1,600 shows, the majority viewed in French on Radio Canada. It’s no surprise he’s a household word in Quebec and is busily breaking through bilingual barriers with Ricardo and Friends on The Food Network and Global. Monsieur Ricardo has his own wine label, a line of cookware, a massive web site and launched the first Canadian food magazine published in both French and English last year.

that proudly carry Non GMO verification and are a delicious way to add more Omega 3s and 6s to the diet. Now when I add a daily spoonful of hemp hearts to my morning cereal or afternoon yogurt snack, I’ll do so knowing that it comes from the world’s largest hemp food manufacturer.

Speaking of large, Lentils Canada  were a major sponsor at FBC2015 and were quick to inform me that our nation grows more lentils than anywhere else in the world. Unlike dried beans, lentils don’t require soaking and cook up faster. Now that my vegetable garden has closed up for the winter, I’ll be sprouting lentils  in my kitchen and tossing into salads or using as a garnish for soups.

Beyond the lentils and swag, the food shots and ceaseless Tweeting, FBC2015 was spiced up with the split-your-gut humour of MC Mairlyn Smith who wields the quickest wit and fastest home economist whisk in town, not to mention a great sign off: Peace, Love and Fibre.

Autumn colours in Toronto November #flowers #riverdale #rose #urbangardening #多伦多 #玫瑰
When apples are your middle name. #apples #appletarts #number10 #getfresh #pastry #baking #tarts #cowichanvalley #bcgrown #苹果 #好吃 #苹果点心 #fbc #fbcigers #einkornpastry #redfife
I harvested these figs from my 5-yr-old tree yesterday after the temps plumetted to -2 overnight. The Cowichan Valley is a temperate zone, but hey, many of these little green Mediterranean orbs were ripe and soft at the end of October, calling to be pulled from a tree that had lost all of its leaves. Weird, huh? Fruit farming is a bit of a mystery! #figs #cowichanvalley #fruit #getfresh #bcgrown #fbc #fbcigers
Roasting a pan full of fall vegetables can be a creative and delicious experience, not to mention a quick and easy solution for dinner tonight. Link in bio for recipe on my blog. #carrots #rosemary #cabbage #roastedveg #savoycabbage #fbc #getfresh #healthyeating #vegout #vegetarian #vegan #烤蔬菜 #爱红萝卜
From banneton to finish, here is one sourdough loaf’s baking journey, step-by-step.
Final harvest. Thank you Number 10 for these big red beauties. This heirloom tree produced some 200 lbs despite the summer drought and freakish heat dome. October rains helped juice them up! #apples #applefarmer #cowichanvalley #fbc #fbcigers #cider #vancouverisland #bcgrows #getfresh #苹果